Several years ago I came across »Nacht mit Gaesten«, a drama by Peter Weiss. It is a street ballad penned in Knittelversen (a kind of doggerel, or poetry irregular in rhyme and verse) that revives the old concept of the “Schaubude” (travelling wooden theatre), as well as adopting elements of the 'Kasperltheater' (classic puppet theatre). Hiding behind the façade of the supposedly humorous is the horror of a cutthroat world in which everyone fights against one another and everyone betrays one another. I regard the piece, which premiered in 1963, as a parable for the brutalization of society.

The musical language orients itself around the genre of the street ballad and the Kasperltheater. With few exceptions that involve singing, the main characters speak in rhymes. They are portrayed as graphically as possible in their one-dimensional, simplistic form. Nothing is musically 'psychologized'.

The composition complies with the text at a structural level, too: mixtures of exuberant triads and fourths and tritones are as omnipresent in the score as rhymes in Peter Weiss’ work. They bring about a similar simplification despite the contrapunctal and rhythmic complexity of the whole.

Since the murderous world of the adults is told from the perspective of the children, the technique of the canon – a popular singing form among children – is brought to bear, as well as the manipulation and alienation of catchy melodies, children’s songs and other musical citations. 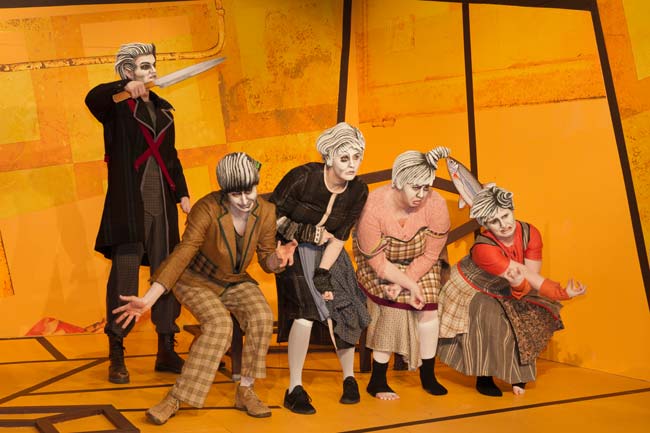 Cast of the World Premiere

It was clear to us all that such a topical piece should also reach young people. Working closely with the university administration and with the generous support of the Vereinigung der Freunde und Förderer der HfM (Association of Friends and Patrons of the HfM), who commissioned me to write a composition, our team designed a concept that has allowed us to stage the music theatre productions at other venues as well without too much effort.